William Shatner is flying on 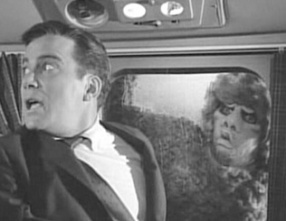 He says “There’s a Gremlin on the wing
And he’s pulling on the wires!”
The attendant says “It’s probably nothing.
Maybe you’re just too tired.”

She calms him with a gentle touch
As the passengers get nervous
One man who has had too much
Says loudly “I Need Service!”

When Dan Hollis has a birthday
He drinks up all the brandy
And  Billy says “Happy Earth Day
Wouldn’t a trip be just dandy?”

Allow me to give you a present
On this, the day you were born
And please say hello to the pheasant
I’m going to wish you into the corn

And Aunt Amy just sits quiet
She really has no choice
Why should she even try it?
Bill Mumy took her voice

Their life is hard, without a doubt
They each have no control
If anyone decides to pout
They’re turned into a troll

Well I digress, that isn’t true
I’ll put it back in the box
But if Bill Mumy doesn’t like you
He can turn you into a Jack-In-The-Box